Buying a loaf of bread at the supermarket is pretty easy in terms of pricing. The baker is aware of exactly what he’s selling (the wheat, the work involved in baking, etc.) and can therefore accurately set his price ahead of time.

For the case of translation, the situation is a bit more complex. This complexity stems from the translator not knowing exactly what kind of work goes into the final product until after he’s already finished the work, or at least looked at it.

This makes it hard for the translator to set a rigid fee ahead of time (like our baker).

However, for the consumer searching for a translator, seeing the translators’ rates ahead of time, when comparing between translators in the results (see sample results for English to Hebrew translators), can be invaluable.

However, even within a given language pair and work type, translators may still feel the need to adjust their pricing. For example, a highly technical document may require more work (and therefore a higher rate) than a simple daily blog post written in plain, everyday language.

For this reason, 2 Drops has just introduced its newest feature: flexible fees.

Before issuing a price quote, translators are now able to adjust their rate by 15% (higher or lower).

For example, say a translator’s rate is set at $0.20 per word, and he receives a request to translate a highly technical academic article that will take up a lot of his time, he can raise his fee by 15% to $0.23 per word.

Likewise, if the translator gets a request to translate a fairly simple text, he can lower his rate to $0.17 per word.

As usual, let us know what you think, we’d love to hear. 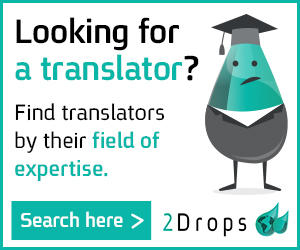